Sleep.....it's every new mom's dream!  I have to say that at the beginning, we definitely lucked out with Little Man.  I never felt the absolute utter exhaustion and sleep deprivation that most new moms feel.  He slept in 3 hour stretches and by the time he was 7 weeks old, Drew would go down around 10:30 and sleep 5 or so hours then feed, and then sleep another 4 hours or so.

When we transitioned Drew to his crib at almost 4 months old it was a breeze!  He would go down easily, wake a few times a night for a quick "paci plug" and sometimes a quick feed and then sleep until morning.  Then came teeth......

Little Man cut his first teeth at the beginning of May and it was miserable (for all of us)!  From that point on the time he spent in bed with us would become more and more frequent.  We tried "crib boot camp" to get him to spend the night in his own bed. This would involve lots of rocking, putting him back into his crib, crying, rocking....repeat over and over again.  It would semi work and then something would come up - more teeth, going away, etc and we would regress back to sleeping with Mom and Mama.

Now don't get me wrong, I love snuggling with the Little Guy!  However, when he takes up more of the bed than the two adults combined, problems arise.  He is a thrasher and mover when he sleeps and NO ONE was getting a restful nights sleep.  But we would keep taking him into our bed because it was easier and better than being up for half of the night when you have to go to work the next day.

Fast forward to the beginning of November.  Drew was now wanting to come to bed with us by 8:30 in the evening.  It was a little different when it was midnight, but 8:30 is a bit early.  We need some "adult" time in the evening after he goes down and before we go to bed!  We decided that the long Thanksgiving Holiday was the time to take action!

We started with naps.  At the babysitter, he goes down fully awake, no fussing and sleeps for 2 hours twice a day.  We were lucky if we could get 2 hour long naps out of him.   We asked Lisa what she does and decided to stick to the same routine!  The first time he cried on and off for about 15 minutes and then took a 45 min nap.  That same afternoon he cried for about 2 minutes and slept for an hour and a half.  The next morning; no crying and 1 1/2 hour nap!  Not too bad!

We went to his pediatricians appt on Tuesday and she told us we need to get him to stay in his own bed NOW before he catapults himself out of his own crib when he is a bit older.  We discussed how he "had our number" (we KNEW that!) and that we really needed to just let him cry and figure out how to stay in his own bed.  She also stated that he may cry for upwards of 2 hours.

We decided to give it a go.  Put him down......2 minutes of fussing......off to sleep.  Midnight wake up - gave him paci, blankey and told him it was night night time.  He cried on and off for 45 minutes, but then stayed in his bed until 7:30 in the morning!  Success!  The next night he woke up a 2AM, cried on and off for 15 minutes and stayed in his bed until 7:45!  Subsequent nights have seen Little Man staying in his bed ALL night without a peep!  We did it and it wasn't nearly as bad as we thought!

I have to say that I think it worked so well because we were ALL ready for this to happen.  We are so proud of Mister and we have been praising him tons for being such a big boy!

For those of you hoping for a full night of sleep....never fear....you will get there!

For those of you who have read all the way through this.....it was longer than I thought!  Here is a recent pic for you! 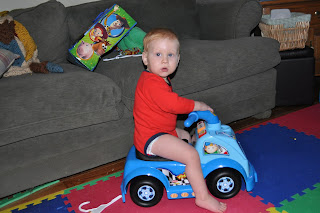 Glad to hear you've been able to get him to sleep in his own space. Our little guy has had a pretty good routine for the past little bit, but there have definitely been times that were trickier. CIO (which never lasted TOO long) was what worked best for us too... though it was hard to listen to him cry!

Hooray for sleeping through the night in his own bed! What a big boy! Now that he is sleeping well, you can enjoy some alone time with eachother :-)